Give a Gift of Warmth St. Louis

DONATE NOW
BECOME A MEMBER
GET HELP WITH PAYING UTILITIES

Check on Your Neighbors 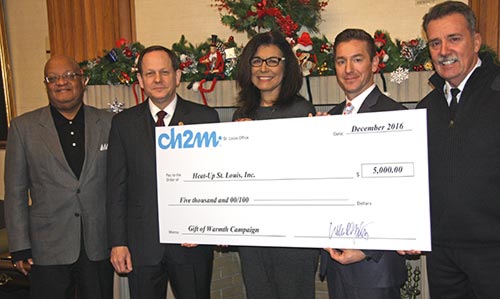 DONATE NOW
BECOME A MEMBER
GET HELP WITH PAYING UTILITIES

(L-R) Cooldownstlouis.org board directors Steve Ehlmann, St. Charles County Executive, and Denise Liebel, President/CEO of United Services, receive a $4,000 Operation Round Up grant from Lonnie Tucker, Communications Specialist with Cuivre River Electric Cooperative. The funds will be used by Cooldownstlouis.org provide utility assistance to low-income, elderly and disabled cooperative members living in Lincoln, Pike, St. Charles and Warren counties, who are experiencing financial hardships during the extreme heat of the summer. 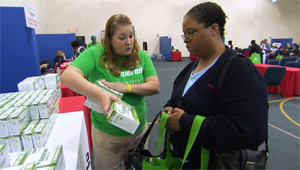 We Honor TV’s Chief Meteorologists For Saving Lives and Protecting Our Families.

Click on the media name to view their acceptance video/audio. 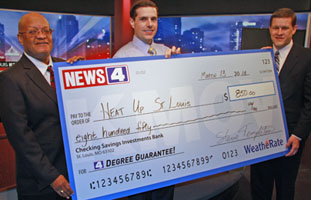 “BE COOL” ON OUR COOL DOWN PHONE BANK! 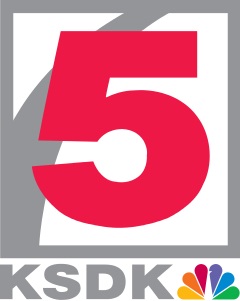 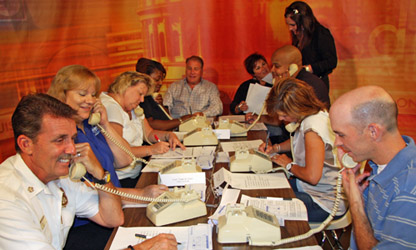 Help Seniors and the Disabled Stay Safe & Cool. Go Surfin’ NOW to our Donation Page – Thanks! 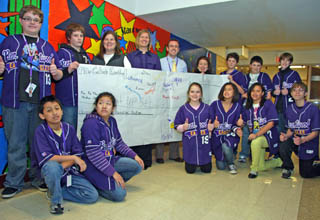 Can You Help With A Fundraiser? Yes….And the Children Shall Lead! Thank You Brentwood Middle Elementary For Helping Keep The Needy Warm This Winter!

We welcome schools on all grade levels, retailers, companies, clubs and other groups to help develop an in-house fundraiser for Heat-Up St. Louis or Cool Down St. Louis, and send us some photos and we will post. For larger public fundraisers requiring our cooperation, please call 314-369-7407. Thank you, so very much. Melanie DiLeo, Board Chairwoman.

Get Up With The Rosters and Rise & Shine! 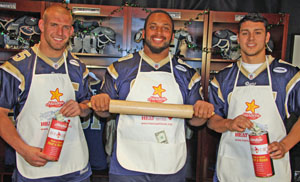 The St. Louis Rams NFL Encourage You To Rise and Shine for Heat-Up St. Louis. Employees of the Rams Join 675 Volunteers As Official Greeters….See ya! 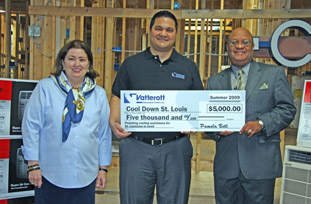 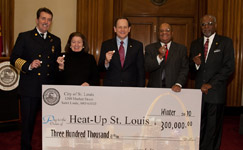 Joined By Area Firefighters, Black MBA, and Young Professionals from the Urban League, College In-Bound students, Citi, St Vincent DePaul and so many others volunteered to help seniors, and the disabled stay safe and warm this winter. Please touch the bucket and go to our donation page; or click on membership for the holidays. 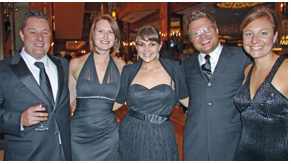 Thanks to Ms. Boyd’s Nipher Middle School Class for Raising More Than $500 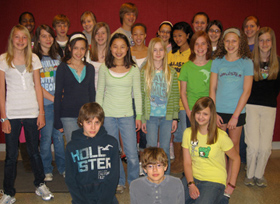 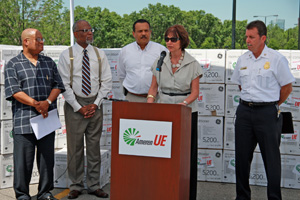 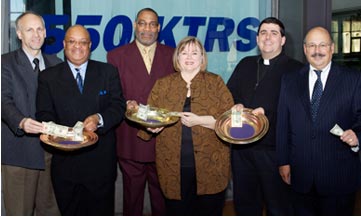 Have a Heart…Heat a Home…VOLUNTEERS NEEDED, AS OFFICIAL GREETERS…The 18th Annual Hardee’s Rise and Shine for Heat-Up St. Louis event, is scheduled for Friday, February 9, 2018, from 6:00 a.m. until 10:30 a.m., at area participating Missouri and Illinois Hardee’s Restaurants.

This past February, thanks to hundreds of loyal Hardee’s customers, Heat-Up St. Louis raised $300,000. 100% of all monies donated went directly to helping area seniors, the disabled and needy families with small children with their high heating bills.

For this event, community volunteers serve as celebrity greeters wearing aprons in Hardee’s Restaurants and directing customers to purchase Sausage & Egg Biscuit or Egg Biscuit Sandwiches for the special price of $1.00, and they collect additional small donations in their aprons or canisters.

All proceeds are then donated to Heat-Up St. Louis, Inc. Businesses and groups can pre-order sandwiches in bulk by making advance arrangements — please call, April, at Hardee’s Marketing at 314-259-6431. She will FAX you back an order form. We will also accept checks for larger donations, merely drop-off in the drive-thru or in-restaurant on the day of the event, or check out our donation page on the website. Local media, civic, political and religious personalities also support this annual media neutral event.

Schnucks Scan and Give to Heat-Up 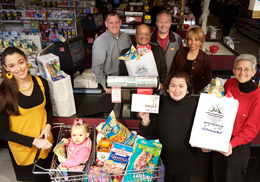 In January Schnucks Scan and Give to Heat-Up was executed in the supermarkets in Missouri and Illinois. The fundraiser is co-sponsored by FOX 2, Y-98 FM, KPLR-TV 11, Suburban Journals and CITI. We also appreciate Charter Cable’s support. During this five-week charity drive, shoppers can scan $5 or $3 donation coupons onto their grocery receipts, totaling any amounts at the check-outs lanes or courtesy desks. Larger donations may be made with a check to Heat-Up St. Louis, c/o UMB Bank, P.O. Box 868, St. Louis, MO 63188 or by going to the donation page on this website for a secured credit card transaction. Thank you, Schnucks and your thoughtful customers!

Rams/Boot Out Old Man Winter and Heat-Up St. Louis: The special FANS collection outside, and inside of the Edward Jones Dome and at tailgate parties was held on Sunday, November 21. Two Hours of Service. We raised at least $10,000. We had about 200 area high school students, firefighters, civic, political volunteers, and media celebrities to show-up appealing to the St. Louis Rams fans, who give from their hearts. Thanks. Can’t attend the game? You can still give, just click here. Just click here.

Shake Our Cans and Cool Down The Seniors fundraiser at Busch this summer will include area volunteers, St. Louis Firefighters, and social service groups, and board members will wear special yellow Cool Down caps and solicit cash in buckets in front of all gates at Busch Stadium by taking donations from Cardinal fans. Also, the charity will use it’s new Cool Down St. Louis Donation tent, so that Cards fans can drop off tax-deductible donations. Also the general public and UMB Bank customers can always drop off their donations to Cool Down St. Louis at all bank locations in Missouri and Illinois. Under the hot sizzling sun, volunteers raised more than $10,000 in small donations, during a three-day period from the generosity of the Cardinals fans. Last year’s fundraiser was held on August 14, 15 and 16 at Busch Stadium. The charity is now accepting year-round, new and good working-used air-conditioners, call 314-241-7668. You can make a special $125.00 tax-deductible donation and Adopt-A-Family by helping us purchase an air-conditioner or paying an electric bill. Also see our donation page for secured credit card donations. 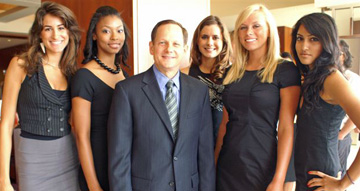 Heat-Up St. Louis expanded its annual Super Heat-Up Religious Weekend Collections from Sunday, February 3 – March 29, 2008.  We’ve raised about $25,000 in small donations from are congregations of all faiths. This is an opportunity for area religious congregations of all denominations to take up special collections, make a special gift or Adopt-A-Family with a  tax-deductible donation to help needy people stay warm and safe this winter because they can not afford to pay their delinquent high heating bills.

Even though many congregations also face difficulties with their own heating bills, we encourage the more than 2,000 area congregations in Missouri and Illinois to participate. Unlike some other charities, 100% of all of our funds go towards servicing the needy.

Not to worry, your donation will go back into the community where you direct it and will do the best good.

With our social service partnerships we will qualify the real needy each winter. Larger tax-deductible donations may be made payable to Super Heat-Up Weekend Collections, c/o 1221 Locust Street, Suite 603, St. Louis, MO 63103.  For assistance, referrals and counseling call our Resource Heat-Up St. Louis Hotline Monday thru Friday, at 314-241-7668. The Hotline is automated, so please be patient. Thank you! 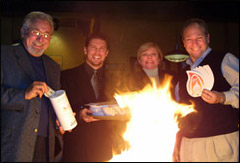 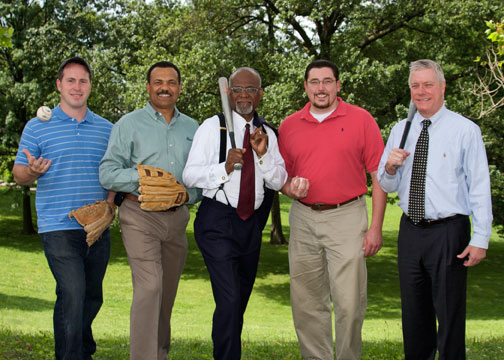 If your company, church, group, organization or club wants to develop a fundraiser for our winter program, Heat-Up St. Louis, or our summer program, Cool Down St. Louis, we welcome your wonderful ideas, and your tax-deductible donations — ALWAYS! Just call Linda, at 314-241-0001, ext. 207 or Resource Hotline at 314-241-7668, and leave a message, or fax us at 314-241-1860, or e-mail us at info@heatupstlouis.org with your intent. Depending on the level of the fundraiser, we will provide you support, and grant permission to use our official logos.

The most fundraising was through the sales of hats in winter and summer programs, respectively, Put a Lid on Old Man Winter and the Cool Down Hat Festivals. It is through these events that much volunteer work has gone into, as social service and community action agencies, board members and friends have dedicated many a Saturday or Sunday to give out hats and caps, donated by the Bee Hat Building, in exchange for donations. One of the board members, Kevin McGowan, a developer, donated retail space on Washington Avenue for hat sales, until construction halted our efforts in July. And Heat-Up St. Louis was fortunate to have Ted Koplar of Koplar Communications donate retail space in the Central West End.

The St. Louis Post-Dispatch lent valuable assistance through its new Community Matters program, letting Heat-Up St. Louis advertise its various special events and appeal messages to their special Fall and Summer Community Matters tabloid sections, which includes information about the charity and how it helps the community, including Cool Down St. Louis.